Ace Combat: Assault Horizon is an arcade air combat game, and the latest in the Ace Combat series, a collection of video games that has a history stretching all the way back to the Playstation 1 and into the video arcades of yore. Find out if the game is any good or whether it crashes and burns in a smoky fireball of metal and pain, after the jump. 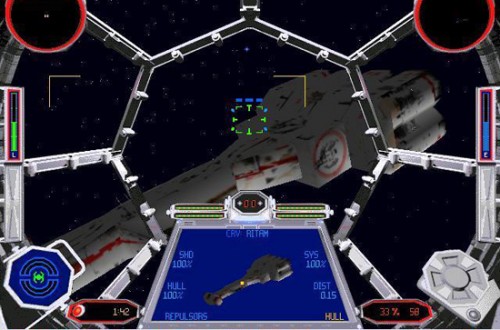 Despite my long experience as a gamer, I must admit a definite personal dislike for aerial-combat type games. I can probably trace this back to the days of trying my damnedest to play Falcon back on my CGA-powered PC and failing miserably to even get the damn jet off the ground, never mind across the runway. Heck, it might even go back to the days of playing Combat on my Atari 2600, and being blown to spinning smithereens by my more nimble brother. On a bizarre side note, I thoroughly enjoyed space combat type games such as Elite, Wing Commander, and TIE Fighter, so I don’t know if my bias is just for realistic combat in real jets. Either way, I am going to make a truly serious attempt at putting my bias aside for this review, and I’ve found the best way to get a true appreciation of game is to put on my Magnifying Lenses of Close Scrutiny, and take a good look at the history of the game. If a game has over 10 incarnations, there must be something to it, right? On the other hand, the history is somewhat…lengthy, and I’m not so heartless as to impose that sheer quantity of reading material on you. So if it truly interests you, you can find the history over at my own gaming blog, TechNinja.co.za.

Ace Combat: Assault Horizon is the latest iteration in the game series and the first Ace Combat game for PS3 (the second, of course, for Xbox 360). The game’s story, crazily enough, has absolutely nothing at all in common with the storylines of any of the prior games. The closest thing it has in common is the real-world setting as seen in Joint Assault. From what I could discern, the story has something to do with double-crossing Russians, big bombs, attacks on large cities…I couldn’t make much sense of the story, never mind tell one character from the other. I understand that the story was written by Jim DeFelice, someone who has had a lot of experience in writing war-type stories, but I’ll admit that the story did absolutely nothing for me. Your mileage may vary, of course, so take my words with the kind of salt that comes from someone who has very little interest in war stories. Story aside,  the game follows in the footsteps of its predecessors by being a reasonably tight, extremely cinematic aerial fighter.

Unlike most of the previous incarnations, Assault Horizon gives you a small selection of aircraft to fly in each campaign mission. As someone who knows less about aicraft than about brain surgery (I was particularly surprised to discover just how much about brain surgery I knew, in fact), the choice for me was largely cosmetic and based on the stats presented at the selection screen. Still, despite the fact that the selection is logically based on the mission you are flying, the sheer overall selection of craft could have been completely overwhelming, so I’m glad that the different types of missions allowed the developers to narrow the choices down. As well as the standard jet fighters from prior games, certain missions in Assault Horizon also give you control of other roles. For example, one mission puts you in the role of the gunner in an assault chopper, while in another, you are the pilot of the chopper. Particularly memorable and fun for me was being the gunner in a bomber and just gleefully bombing the hell out of the enemy insurgents many, many miles below.

Since you spend the majority of the time in jet fighters (both time-wise and by number of missions), the best way for me to illustrate how the game works is by detailing a typical jet fighter mission. After the cut scene ends, you’re allowed to choose which aircraft you want to fly (whether it be a F-16C, a MiG-21bis, or an F16-F, or any one of a dozen more types of fighters), and the weapons (mostly missiles) you want to equip your chosen craft with. In most cases, you start the mission with your aircraft already airborne. The radar on your screen blips to tell you where the enemies are, you steer your jet in the direction of the opposition, and you follow the targeting pointer that points you towards the enemy that the internal AI has chosen for you. You can, of course, change the selected target, but I’m going to assume for a moment that you’ll go with whatever target has been selected for you. Once you finally manage to locate the target, if the jet is not a squad leader, you have a chance at being able to finish them off with missiles from a bit of a distance. If you’re not quite so lucky, or you’re targeting a squad leader, you have to get in close enough to enter close combat, what the game calls “Dog Fight Mode”, or DFM. The game zooms you in and locks you onto the tail of your enemy. You lose most control of your jet fighter in DFM, but you can still move your aiming reticule and try to keep your opponent in the reticule long enough for the missile guidance to lock on and blast. In the cases of certain enemies, the action is pretty heavily scripted and on rails, and no matter how many missiles you fire at the sucker, he’s not going down until the game says “right, that’s the obligatory action sequence over with!” It’s very cinematic, dramatic, and altogether enough to make Michael Bay jealous. And of course, once you’ve destroyed your chosen opponent, it’s a case of “wash, rinse, repeat with new Ad Nauseum™ shampoo”. I have to admit that watching an enemy aircraft explode in a Michael Bay-esque explosion is fairly satisfying, but it gets old SO quickly, and by the 40 or 50th craft you’ve blown up you’re ready to either claw your kidneys out or put the controller down and play something else. Needless to say, the jet fighting portions of the game were my least favorite, despite the attempts to Hollywoodize it. 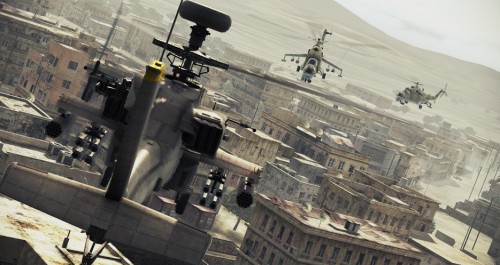 The aircraft you have are wonderfully controllable, and this is where the game excels; the planes manoeuvre well through the skies, and you seldom feel as if you don’t have enough movement on the stick. Within a level or two, you quickly come to grips with flying the jets, but the game swaps and changes aircraft types so often, it might take a bit of time before you’re fully comfortable with every type of aircraft available. For example, the first mission has you flying a jet, the second mission sees you taking control of a door-mounted gun in an on-rails helicopter segment, the third puts you back in the cockpit of a jet, and the fourth mission sees you taking the bomb controls in a AC-130U gunship. On the other hand, each mission can take a while to complete, depending on how well you fly, so you’re given plenty of time to used to the controls again. The most frustrating vehicle, I found, was the helicopter, and this was also the only vehicle I flew in first-person mode due to the helicopter blocking the aiming reticule in 3rd-person mode. A bit of a silly design flaw, I feel. Once again, you do eventually get used to flying the dratted thing with enough experience and flight time, but the first time you’re dumped into the cockpit of the Apache Longbow that you first fly in, it’s a frustrating experience. 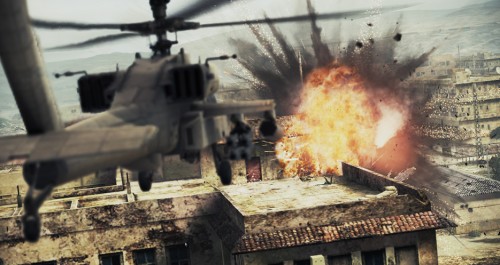 Thankfully, the game temporarily checkpoints your progress during a mission, so if you happen to crash and burn in a flaming ball of aircrafty shrapnel, oil, smoke, and missiles, you can restart from the checkpoint instead of reloading the whole mission. This is both a blessing and a curse: a blessing because missions can be lengthy; one mission I played took almost half an hour, and I’d have been thoroughly emotionally downtrodden and demoralized if I had to start the thing from the start again; a curse because it also saves your ammo counts at that point. If you’d been particularly cavalier about your ammo, and were running short toward the end of the campaign, you better man up and live with it, or restart the mission and be a bit more sparing.

Once you complete a campaign mission, you are able to freely replay the mission for score. Sometimes, the acts that will net you the highest score aren’t the acts that you’d perform to complete a mission, so a different approach is often needed with the freeplay missions. You’re still locked into the aircraft choices that you are locked into during the campaign, but the game awards you skill points in exchange for flying well. These skill points are used to unlock skills that you can add to a skill set (up to five skills) that can help you net a higher score. These “skills” include more missiles, extra bombs, enhanced cooldown of your machine guns, etc. At the end of each freeplay segment, your score is uploaded to the leaderboards and you’re scored on how accurate you were, how long you took, how many quick kills you made, and about five other different criteria.

If you’ve had enough of campaign and freeplay modes, you can head online and feud in online multiplayer. Multiplayer has four modes: Deathmatch, which is basically a free-for-all shoot fest; Mission Co-Op, which allows you and up to three friends to play specially designed campaign missions together; Domination, which is the Ace Combat version of “capture the base”; and Capital Conquest, a mode that sees you playing on either one of two opposing sides, either attacking or defending a city. Out of all these multiplayer modes, Capital Conquest is the most fun, since you can choose any of the aircraft available to the game, including the bombers planes. The entire game is worth it for this mode alone, in my opinion, but note that if you’re not very good at DFM, or have trouble dodging missiles and attacks, you’re going to struggle against more experienced players on the opposing team. 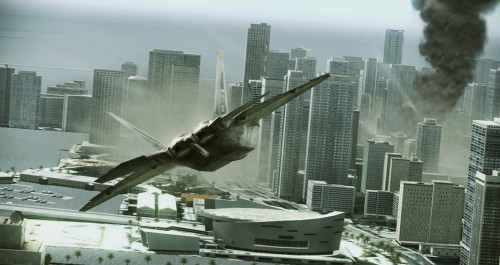 Overall, Ace Combat: Assault Horizon isn’t a terrible game, and despite the somewhat confusing story, some fun can be squeezed from it, especially the non-jet fighting and multiplayer portions. Sadly, however, the jet fighting and dog fighting is the starring attraction of the game, so expect to spend a lot of time in one sort of jet fighter or another, picking off your enemies one by time-consuming, boring one, only changing the formula now and again whenever one of the enemy craft decides that maybe it’s time to target you. Despite that, it’s a more than halfway decent arcade flight sim, with more in common with After Burner than a more serious flight sim such as, say, Microsoft Flight Simulator, but you’ll probably get the most worth and fun out of the multiplayer and freeplay portions of this game.