Ezio’s back, and this time he’s brought Altaïr with him in another fun-filled, stabby romp around around Europe. This time, Ezio takes us to beautiful Constantinople (now it’s named Istanbul). Is the outing to Constantinople any better than the picnic in Rome? Do we prefer renaissance Turks to renaissance Italians? Let’s go exploring to find out. 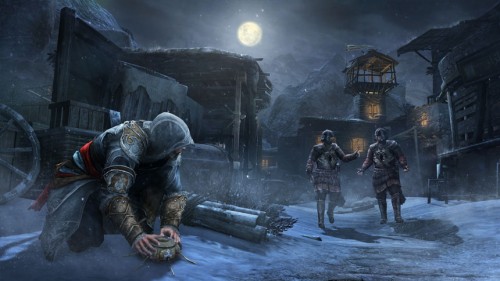 The events of Assassin’s Creed: Revelations occur almost immediately after Brotherhood. Desmond wakes up on Animus Isle while his body lies in a coma. He meets Subject 16 who tells him that to wake up from the coma he must reconcile all of the memories of Altaïr and Ezio until his genes have nothing left to tell him. To this end, a gateway exists that fires up the remaining portions of Ezio’s life. Cue 1511 AD: Ezio makes his way from Masyaf to Constantinople, looking for five keys (most of which are in Constantinople, and one of which is in the underground city of Cappadocia) that will open the doors to Altaïr’s library. With the acquisition of each key, Ezio explores the memory that Altaïr left on the key, showing the events post-Assassin’s Creed 1 (fun fact: Altaïr’s accent in Revelations is not American like it is in Assassin’s Creed 1 due to, so we’re told, a more advanced Animus. Still the same voice actor, though!) That’s the plot in a very small nutshell. Incidentally, If you pick up any of the special editions of the game, you’ll also get the short film Assassin’s Creed Embers, which closes off Ezio’s story for good. It’s a brilliant watch if you’re into the story. 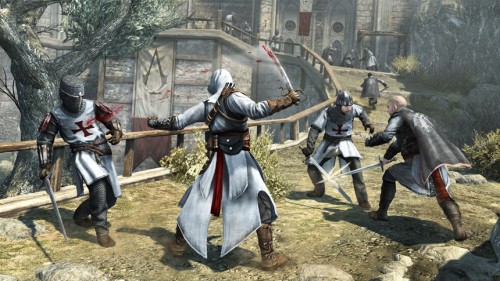 Much of Revelations is a case of “pity that it’s…”, starting with “pity that it’s not as massive a leap forward as Assassin’s Creed: Brotherhood”. You could, I guess, call it a minor upgrade, because aside from a few minor changes (your hidden blade becomes a hookblade, for example, and you now have the ability to craft a variety of bombs), the game isn’t terribly different from Brotherhood. The Borgia towers have been replaced by Templar towers. Rome has been exchanged for Constantinople. Machiavelli has been replaced with Yusuf Tazim. Leonardo has been replaced with famed cartographer Piri Reis. The prostitutes have been exchanged for Romanies (gypsies, to us plebs). The thieves and mercenaries are precisely the same, as are the guards. You still have all the same weapons and tools as before. You can still summon bands of assassin’s from the deepest bowels of every nearby haystack. And the list goes on. Heck, even some of the music is spookily similar. 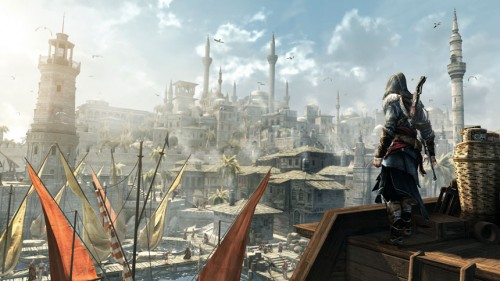 Still, as the old adage goes: “if it ain’t broke, don’t f**k with it”. And Ubisoft haven’t. Well, mostly. Assassin’s Creed has always been about the story and the characters and the richness of the history and setting. It’s what makes the game so beautiful. That, and the stunning sunsets from the top of the Hagia Sophia. So what IS different about Revelations? The one thing you notice almost immediately is the fact that it’s now far more difficult to reduce your notoriety meter to zero. Whereas in AC2 and Brotherhood you had the ability to remove posters from wall, this game gives you only heralds and officials, and even they’re not guaranteed to appear. Furthermore, the act of renovating Constantinople automatically raises your notoriety, meaning that all you need to do to get the guards chasing after you is renovate four or five shops. Combat is mostly the same, but there’s now more of an emphasis on stealth and misdirection than outright action. One of the other minor changes from Brotherhood to Revelations is that the various assassins you manage to collect and send around the Mediterranean can actually be permanently posted to another city, leaving an opening in your merry band that you can fill in the usual way. Cities under assassin control also tithe money and bomb components at regular intervals, so there’s a nice incentive to keep it that way, because if you ignore a city long enough, the Templars take control again. 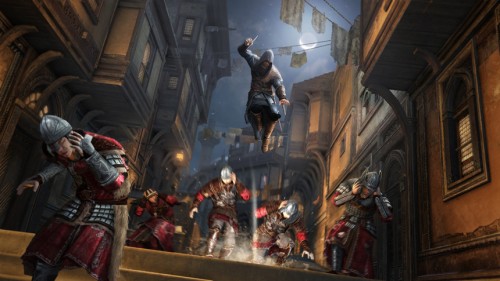 The biggest change to the gameplay occurs after you’ve captured a few Templar towers (which convert to Assassin Dens upon capture). If you leave your notoriety on high (i.e. 100%) for long enough, the Templars will try to wrestle control of the den back from you, starting one of the most hated aspects of Revelations: a tower defense-like minigame called “Den Defense”. In Den Defense, you stand on a rooftop overlooking the street leading up to the Assassin Den, while Templars march merrily along with various weapons and so on in an effort to take the den back. Your task is to post assassins to various rooftop and street-level points in the avenue in an effort to try to stop said merry Templars. It’s typical tower defense: some assassins are short range and powerful, others are long range and weak, others sit in barriers that you erect and skirmish with the Templars. Each Den Defense level can take up to 5 or 10 minutes to play through, although it may seem longer if, like me, you don’t particularly like tower defense minigames. The good news is that, if you’re an excruciatingly careful player—like myself—you can limit the number of times you play Den Defense to precisely once.

On the other hand, if you enjoyed hunting around Italy for subject 16’s glyphs, you’re going to be severely disappointed: there are no hidden glyphs. It’s a pity, because solving those puzzles are one of the things I really loved about AC2 and Brotherhood. Furthermore, if you enjoyed the minor shop quests, you’ll not find those either. Nor will you find any of Leonardo’s fantastic contraptions. Nor either much in the way of courtesan, thief, or mercenary missions. It’s like they’ve taken away much about what was so awesome about Brotherhood and replaced it with bombs. Lots of them. Almost 150 different kinds of bombs. Most of which do the same damn thing (i.e. violently and amusingly asplode stuffs). Mind you, although the Subject 16 glyph puzzles have been removed, they have been replaced with “Desmond’s Journey”, five Portal-esque puzzle 1st-person platforming sections. They’re neither long nor overly difficult, but it’s something, I suppose.

Not everything about Revelations is inferior to Brotherhood, however: the multiplayer segment has actually been improved somewhat, what with the addition of new characters, new weapons, and new multiplayer modes, including deathmatch and CTF modes. The matchmaking in multiplayer has also been vastly improved over Brotherhood’s, and I managed to find games in less time that it takes to slaughter a squadron of Byzantine guards. The multiplayer is just as paranoia-inducing and fun as before, and I for one absolutely love a game based more on stealth and paranoia than simple outright blasting in on all cylinders. Note that you’ll need an online pass to play multiplayer; just something to watch out for if you ever end up getting this game second-hand.

All in all, Revelations is not a bad game, not by a LONG shot, despite my constant curmudgeonly behavior. I’ve played bad games; bad games are not fun. Assassin’s Creed: Revelations is more fun than you can reasonably hide in a random cart of hay on a random street beneath a random high tower. However, when compared to Brotherhood, Revelations seems lacking (although it’d have scored higher if they’d taken away the idiotic tower defense in exchange for some more missions!). It’s difficult to rank a game like this on its own merits purely because it comes from a line of other games, and when you have something to compare it to… well, let’s just say it’s human nature to stand things up against other things. Should you buy Assassin’s Creed: Revelations? Hell yes. If you don’t play it for the story, at the very least get it for the paranoia-inducing multiplayer. And if that’s not enough for you, if you buy the PS3 version of the game, you also get Assassin’s Creed 1. Just because.

Despite everything that’s wrong with this game, there is so, so much that still comes brilliantly and murderously right.