When Star Fox appeared on the scene for the Super Nintendo, it blew everyone’s minds at the time. It featured 3D polygonal graphics on a console that wasn’t supposed to be capable of it thanks to an extra chip in the cartridge called the SuperFX. Furthermore, the game was an insane amount of fun because it deviated quite strongly from the usual platformers that were the order of the day. Star Fox made a reappearance on the Nintendo 64 in Lylat Wars, and once again broke the mold by being the first game with rumble. It made a few, less notable appearances again on Gamecube and now, 10 years after the last home console Star Fox game, we have Star Fox Zero on the Wii U. Get suited up and I’ll meet you in the briefing room for the review.

Storywise, Star Fox takes place after Fox’s father, James McCloud, had gone off to investigate Planet Venom with his team, Peppy Hare and Pigma Dengar. James sacrificed himself in the mission to save Peppy, both of them backstabbed by Pigma who had been working for evildoer Andross. Peppy returned to report the events, but by this time, Andross had created an army and started attacking the Lylat system. It’s now five years later, and the entire system is entrenched in an extended war with Andross and his forces. Fox McCloud pulls Team Star Fox out of retirement to help take down Andross and his minions, assisted by flyboy Falco Lombardi, old veteran ace Peppy Hare, and mechanic Slippy Toad. 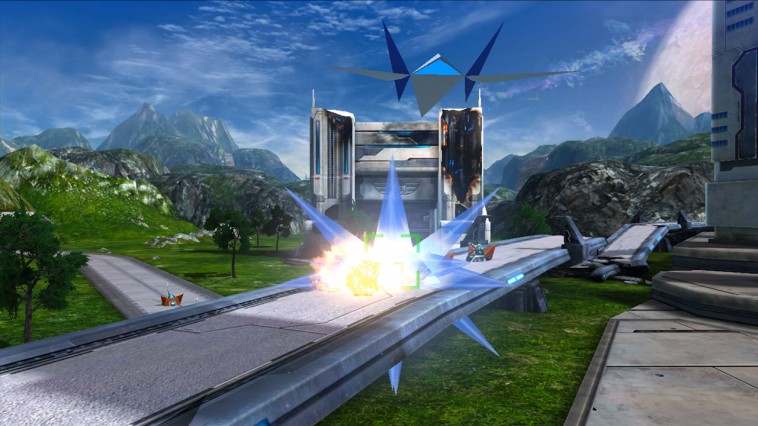 You fly in the role of Fox himself, and during the course of the game, you get the chance to pilot a number of assorted vehicles. Your main starship in Star Fox Zero is the Arwing, which seems to hail from the reaches of the Robotech universe, because it can transform itself into a walker upon command, allowing you to explore the ground on foot. And yes, it looks a bit like a cross between a chicken and the Guardian mode of a Robotech Veritech fighter. By deliberate omission, I guess, there’s no Battleoid equivalent. Pity. The next ship is a copter called the Gyrowing, and it’s equipped with a robot that can hack terminals and also pick stuff up. The last ship is a kind of tank called the Landmaster. Not content with being land-bound, it can transform into a heavy-duty bomber called the Gravmaster, the caveat here being that its transformation is time-bound. You don’t get to choose which vehicle you pilot, by the way; each mission has its vehicle chosen for you already.

Most of each Star Fox Zero level is an on-rails shooter where you blast down enemies that appear on screen; this game has possibly one of the hardest difficulty curves I’ve ever faced in terms of controls, and I’m guessing that it’s the most unique control system I’ve ever played. Your TV and Wii U GamePad display two different images. The TV shows the view from outside your ship, and you control the ship with the analog sticks. The GamePad shows a cockpit view which you control with the motion controls. My initial impulse was to try controlling with one or the other, but it felt a lot like fighting with the controls. The reticle moves all over the place and it feels like a ridiculous fight between the control stick and the motion controlled reticle. It took actually changing the control mechanism to only move the motion reticle when locked onto a target for me to figure out how it all fits together, and that “aha!” moment was brilliant. Thing is, you don’t always have to be looking down at the GamePad; you only need to check it when you need to fine-tune your targeting, or for those sections where you need to hit smaller targets. If you’re piloting the Gyrocopter, the GamePad shows the robot’s view as you guide it around the environment. 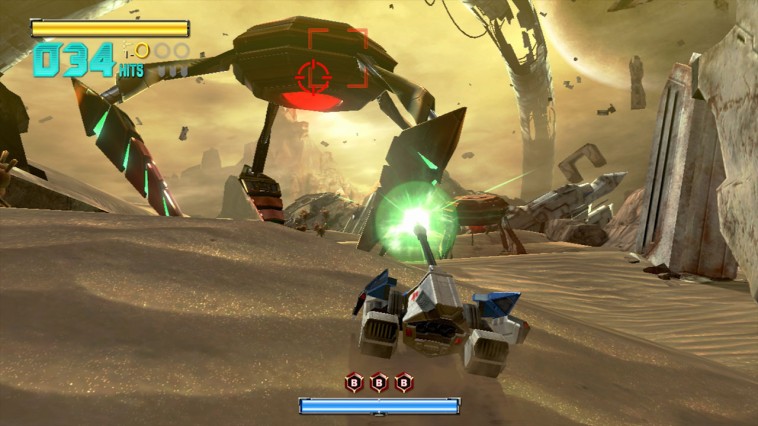 There are times when the game changes from on-rails shooter and allows you to fly freely around, and these sections felt more to me what Star Fox Zero should have been all the way through. There was one mission halfway through the game where you have to stop missiles from getting to a portal that I should relate. The mission not only had me shooting down opponents while trying to destroy the missiles, I also had to protect the Great Fox, the flagship of the Cornerian Army. Performing all these tasks meant juggling enemies and priorities while transforming between Arwing and Walker. I failed the first few times but then everything just clicked, and suddenly I felt like a flying ace, pulling off maneuvers in space, blasting enemies, protecting my allies and it was GLORIOUS. The Landmaster and Gyrocopter sections offered a decent change of pace from the frenetic action of the Arwing sections; the way you play these levels is naturally slower, more strategic, and more deliberate. When these sections were originally shown in video, I was a little worried about how they’d integrate into the game, but playing them put my mind at ease.

The game also contains a two player mode, where one player controls the vehicle and the other controls the cockpit guns (or the robot, if you’re playing a Gyrocopter mission), and this is another way of getting to grips with the controls, since either way you’re not fighting the reticle. I played this mode with my sons, and it lowered the difficulty curve enough to make it easier for a younger player to grasp the control systems. I have to recommend this method of play, especially for new players to this game. You can use either a Pro Controller or a Wii Remote to control the vehicles; the GamePad is always used for the cockpit view.

The biggest issue I have with the game is the difficulty curve on getting to grips with the controls, as I mentioned above. Once you have managed to wrangle that down, you can sit back and start enjoying the game. What I liked was that each stage has branching paths and multiple ways of getting through. For example, in the first stage on Corneria, I discovered at least two separate ways of defeating the stage boss. Each stage also has multiple ways of getting to the end, with optional bosses to fight as well. These bosses are heavier and more difficult to defeat. The game has secrets aplenty to unlock, giving it a longevity beyond what you’d normally expect from a shooter like this. Further, Star Fox Zero caters very much to the nostalgia crowd who played the originals. For example, the voice sample that plays “Good luck!” before each mission is the same sample that played in the original Star Fox. And if you happen to have a Fox amiibo, you can use it to change your Arwing into the original one, too. Incidentally, if the game is not hard enough, you can use a Falco amiibo to give you the Black Arwing and raise the difficulty. 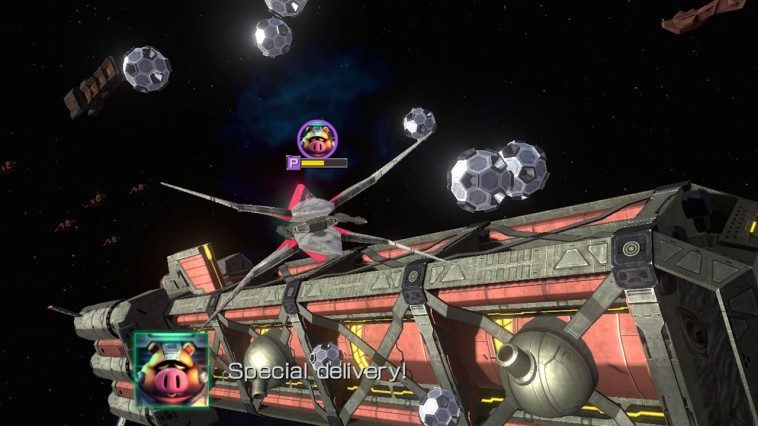 Star Fox Zero, while challenging, is still an excellent experience to play through, with plenty of replay value. It does not give up its secrets easily. The addition of a two player co-op mode adds extra replayability, as well as afford younger or more inexperienced players a chance to get to grips without the frustration. Players who enjoyed the original games will find plenty here to crow about, since the game is a damned fine Star Fox experience at the core. Even if you’re a Star Fox veteran, Star Fox Zero will give you enough of a challenge to make it worth the price of entry. If you’re a beginner with no one to play with, you have two options: man up fast and learn to fly, or find a friend. Either way, you’re in for a hell of a lot of fun.