Ratchet and Clank originally debuted on the Playstation 2 back in 2002 to huge acclaim, partly due to the humour, partly due to the platforming design, but mostly due to the insane array of weapons you can shoot things in the face with. Numerous sequels and HD remasters later, the game is getting a movie based off the first game. This naturally means that the first game needs a reboot. Grab your weapons, unplug Mr Zurkon, and come along as I review this new rebooted Ratchet and Clank.

Given that the game series is now 14 years old, there are probably a bunch of early teenagers who have no idea about the awesomeness they’re about to meet. The story of Ratchet and Clank has been factored to better suit the upcoming film, so even if you’re familiar with the original game, it will behoove you to pay a modicum of attention here. The story is told from the perspective of a jailed Captain Qwark being asked about the heroes, Ratchet and Clank. Qwark explains that Ratchet is a Lombax, a large-eared feline species that likes to tinker with mechanical stuff, and he works out of a garage on planet Veldin. He dreams of joining the Galactic Rangers, a group of fighters of questionable eliteness who keep something akin to peace and order in the galaxy. After acing the tryouts, he’s deemed too puny by the Rangers’ leader, Qwark. Meanwhile, in a factory building warbots, a reject is created and is marked for disposal. The reject escapes after learning about the evil Blarg army, and tries to get to the Galactic Rangers. His ship is damaged, which means it can only get as far as Veldin. The ship crashes near Ratchet, who names the reject Clank, and fools him into thinking that he actually is one of the Galactic Rangers. The Blarg attack Veldin, so Ratchet and Clank must escape and warn the Rangers about the approaching danger. Cue ensuing hijinks. 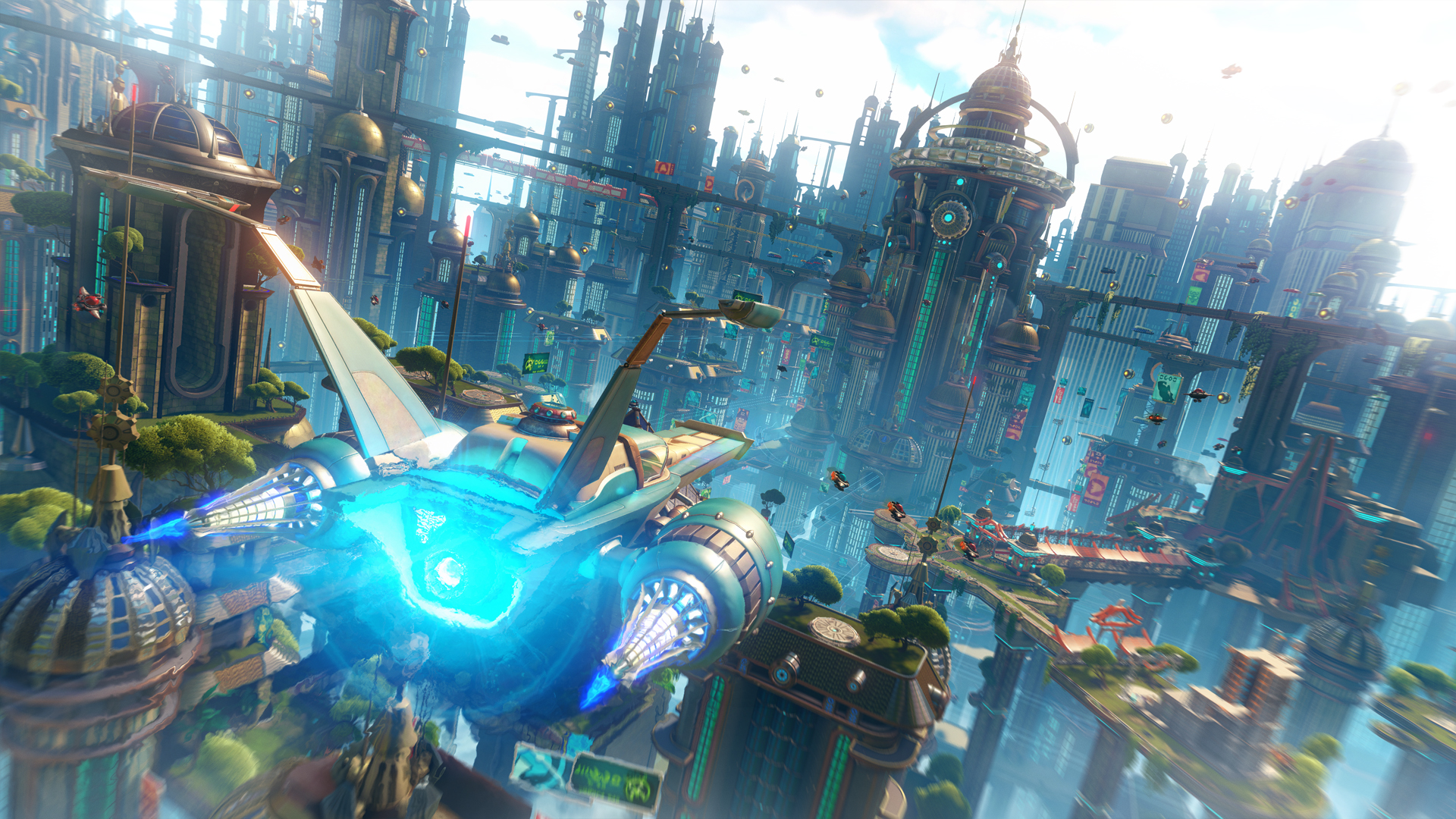 To prepare for this review, I replayed portions of the original Ratchet and Clank to get a feel for how the game looked and felt, and then played this PS4 remaster. There’s a bizarre feeling of familiarity, nostalgia, and awe at the updated graphics and story. Somehow, it feels like this is probably the game that Insomniac wanted to create way back in 2002 but couldn’t due to the technological limitations of the PS2. It’s funny how groundbreaking the PS2 was for its time and how backward it is considered now. I remember playing Ratchet and Clank back then and thinking how the hell they could keep so many little bolts and springs on the screen coming at you. The PS4 remasters hasn’t just taken the original game’s code and assets and rejigged it; they’ve completely recreated the game instead. You can see from comparison screenshots just how absolutely beautiful the game is.

While the game isn’t entirely new, much of the progress from planet to planet has a more logical story link connecting them. The planets also feel more lived in, thanks to more lively characters. For example, in the original game, the person who handles the sign-ups to the hoverboard races is a robot. In this game, it’s a living alien person. Many of the enemies have also been replaced with Blarg, leading away from 2002 Ratchet and Clank’s robot-filled galaxy. A number of foes and features from more recent games in the series make an appearance here, too, such as the involvement of Dr. Nefarious, who has perhaps one of the biggest changes in the game, going from being entirely robotic to humanoid. 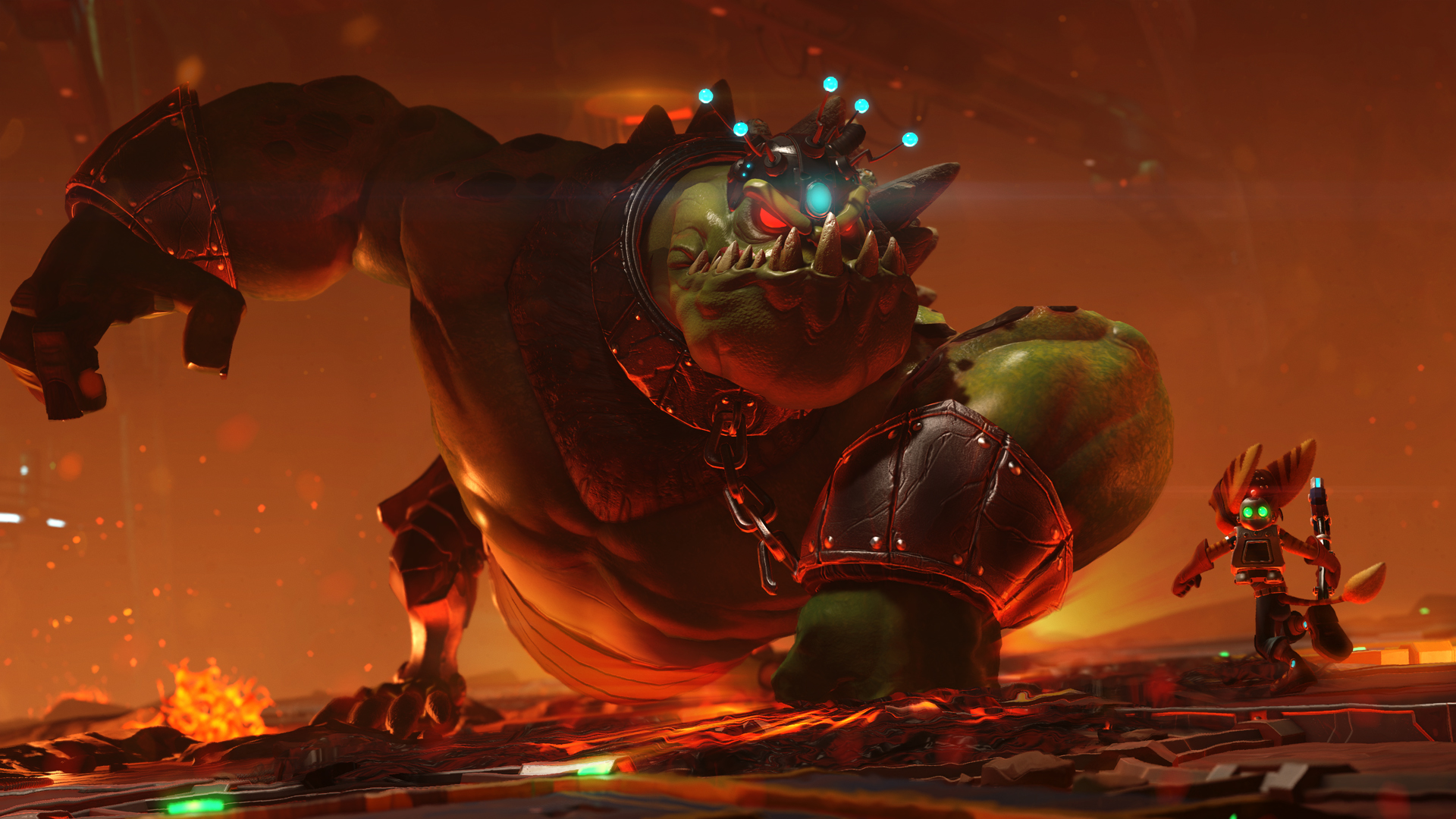 The weapons system has also been overhauled quite a bit. In the original, you upgraded weapons with repeated use. While that also happens in this game, there is a secondary upgrade system you can access from the Gadgetron Weapons shop terminals, which allows you to exchange raritanium for minor upgrades, much like what we’ve seen in more recent Ratchet games. Not all the weapons from the original game made it into the remake. We still have the Pyrocitor, Bomb Glove, and Glove of Doom for example, but some of the weapons are from much later games in the series, such as the Buzz Blades and everyone’s favourite, Mr Zurkon. There are also a good few new guns too, such as the Pixelizer that acts like a shotgun that turns your enemies into a 1997 sprite. I’m okay with all these weapon changes, because there were a good few from the first game that were fairly useless. The taunter is a good example here.

One section that bothered me a little was the sound design. A fair amount of the music is similar enough to the original that it doesn’t make a difference, and I’m okay with that; the music in these games has never been the top billing. The wonkiness came from some overactive echoing in some of the levels. You’d expect echoes in giant, closed chambers, not outdoors on an icy planet. It was weird to hear, and oddly distracting. 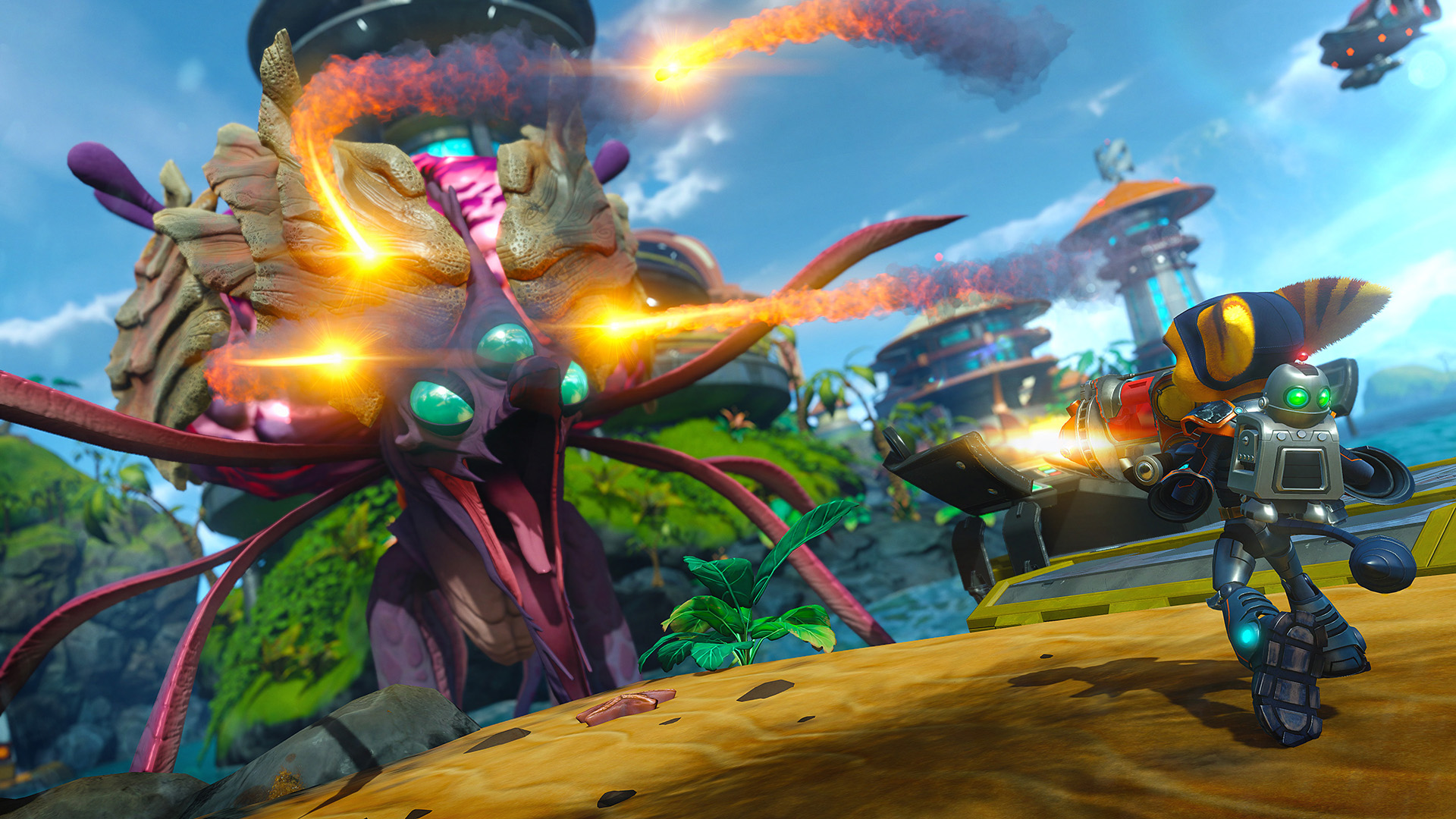 I couldn’t find much fault with the game. It’s gorgeously made, with all the humour, hallmarks, and zaniness from the game’s later series entries, while retaining the core of what the original was all about. I can’t complain too much about how the story has been refactored, but I think Insomniac probably find Captain Qwark a lot funnier than I do. Self-smug moronic characters don’t make good set pieces.

Ratchet and Clank is the way you make a real reboot. It’s gloriously over-the-top, it retains its humour, and is even a little too self aware sometimes. The game also takes a number of scenes directly from the film for its cut scenes. The game looks about as good as playing through the film, and of course, if you’re a fan of the series, this is definitely one that you shouldn’t skip. And if you’ve not played Ratchet and Clank before, be prepared for a most brilliant adventure through the Solana Galaxy. And the best part of this game coming at the same time as the films? I might finally just get the Ratchet and Clank figurines and toys I’ve always wanted.