We Review: Ico and Shadow of Colossus HD Remastered Set

A decade is a long time in the video game industry. Technological advances happen each and every day and game designers push the envelope of possibility further and further. But ten years ago Ico pushed so hard it changed everything. And soon thereafter Shadow of Colossus gave its own gigantic shove! If you mention either of these two games to most veteran gamers, you are likely to receive an enthusiastic earful. Simply put: these games were revolutionary in their time. But has the steady passage of time dulled the experience? Is the HD treatment enough to bring these two classics up to date? Find out after the jump.

I have stated before that I’m new to console gaming; my gaming roots are firmly enmeshed in the PC realm, and for me games such as Baldur’s Gate and Duke Nukem defined my experience. This explains why I was so upset at the trash that was Duke Nukem: Forever. Yes I’m still not over it. With Ico and Shadow of the Colossus, however, I had few preconceived notions. I had heard of both games, certainly, usually spoken in the same breath as “awe-inspiring” and “fantastic”. In fact, so many of my friends had told me their stories of their first time playing Ico that I was quite nervous.

I shouldn’t have been. These games withstand the test of time, holding fast against the tide of years washing at their HD-encrusted feet. They are, in short, brilliant. There are some quirks, of course, and I think it’s safe to say these games won’t inspire everyone, but if you’re even remotely interested in games that have depth and aren’t simply glossy Hollywood movie-alikes, you’ll undoubtedly love them.

Lead designer Fumito Ueda’s vision of a Japan populated with supernatural forces, the reverent tone of the games and the emotional connection between the characters stand up to the passage of time with ease. The restrained art style benefits greatly from the HD investment, but it is the scale of the architecture and levels and the grandness of it all that captures the imagination. The first time you stand atop a windy castle tower in Ico, or your first sighting of a Colossus in Shadow, are moments to savor. I literally had to put the control aside for a bit and just enjoy the experience.

Ico is a thought-provoking adventure wherein you play the role of a young boy abandoned in a vast castle as a result of his ‘curse’ which manifests as a pair of horns on his head [Ed: As opposed to a pair of horns…elsewhere?][Auth: Ever seen a rhino?]. Your child hero seems insignificant, surrounded as he is by the vastness of the castle in and on which the game takes place. It is truly epic in proportion, and there’s a sense of scale here that is quite daunting. Haunting music and touches of brilliant sound design, such as echoing footsteps, reinforce your absolute isolation. So when you finally find your companion, Yorda, there is a sense of relief. Holding her hand to guide her around and over obstacles and to protect her from shadowy assailants seems less of a chore and more of a way to stave off the isolation. Emotional attachment like this is indeed a rare thing in a game; I never thought holding hands would be such a meaningful part of a game and also such a good game mechanic! I held my breath each time she leapt a gap and I was there to catch her on the other side.

While Ico isn’t an action game in the usual sense and the pace is perhaps just a little slow at times, there’s enough puzzling and enough stick whacking of shady spirit creatures to keep you riveted. I had a slight problem with the clunky save system (you have to seat yourself and your companion on a bench to be able to save!) but that’s certainly picking bones. Another problem is that Yorda is a little slow on the uptake, I’ll forgive this PS2 game for its faulty and often irritating AI, but I wouldn’t forgive a game of this generation. This game was outstanding for its time and even now I would recommend a play-through to most anyone.

Then there’s Shadow of Colossus. While it’s never clear if Shadow is a sequel or prequel to Ico it seems clear that they take place in the same world, or at least, the same general universe. Here, the hero, a young man, is on a mission to save a girl. In a Shyamalanistic twist, it seems that this time the girl is already dead and is going to take some serious saving. You’re told by a mysterious voice that you can save her by killing sixteen colossi that roam the land. As with Ico, in Shadow you have a companion, this time in the form of your horse. The two of you will gallop across the vast open landscapes in search of the giant [Ed: Colossal, even?] colossi. Once again, the vastness of the landscapes and the epic proportions of the buildings had me gazing in awe and feeling rather small [Ed: I have a suspicion that this may actually have been part of their cunning plan].

And then I met my first colossus. The scale of these giants is simply breathtaking: they are massive and imposing and in most games I would have run from them. But not here. Fortunately, each colossus has a weak spot or two. Climbing their bodies and solving the puzzle gets more and more difficult with each colossus you defeat, and you will frequently scratch your head and swear as you fall to the ground for the umpteenth time. But you’ll keep going, because it’s Just That Good. After a while, the moral implications start to really get you down. Why was I killing these giants? Just how the game twists your feelings to this degree is a measure of how good a game it is. The number of times I’ve played a game through and casually killed hordes of creatures and scores of human assailants and never batted an eye are without count. Yet, here I was, three colossi down and it was getting the better of me. A video game playing with emotions other than anger! Who would have thought!

On their own each of these games would be a great addition to any gamers collection. Together in one set these games make for something special indeed. While Ico has a few quirks, I would struggle to find fault with Shadow. They complement each other well. If you value video games for their playability, uniqueness, and as works of art, then look no further than this amazing set. After having played them for myself, I finally understood what everyone was raving about. Ten years hasn’t dulled the experience: instead, it has served to highlight just how good these games were for their time, and indeed how good they still are. Play them, you won’t regret it.

Batman Characters in the Style of Dr. Seuss 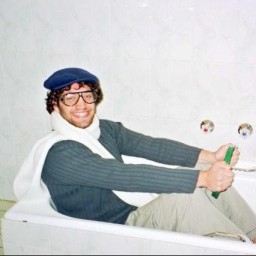